The Japanese Garden at Brisbane Botanics by Wayne Richards

The garden, designed by Kenzon Ogata, is in the tsuki-yama-chisen (mountain, pond, stream) style. The main visual elements are the waterfall, the stream and the pond. A mound, lawn and a viewing arbour complete the garden. 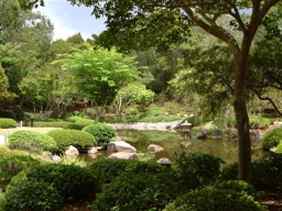 Despite the proximity of a major road, the garden succeeds in evoking an atmosphere of calm and tranquillity. Popular with wildlife, native lizards skitter across the manicured lawns whilst ducks glide across the pond.

Originally a feature of the world expo 88, it was given to Brisbane by the Japanese government and was officially opened on February 6th 1989. Now some 18 years on the planting has a well rounded maturity. Colour is predominantly green with interest provided by form and texture. The absence of colour makes its eventual use all the more striking, the vibrancy catching the eye, the colour enhanced by its isolation. 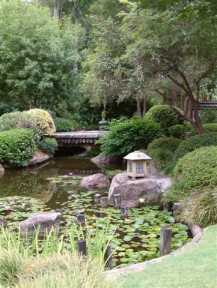 As well as colour, sound and scent play supporting roles. The constancy of the waterfall providing a natural soothing rhythm that runs beneath the elaborate melodies of the birds. A smooth path winds around the garden, designed in such a way as to slow the visitor down, it curves gently around the planting, the lack of straight lines a purposeful omission.

Perfectly proportioned trees provided the vertical elements throughout the garden, their structure echoed by the upright wooden supports of the seating pavilion. This is just one of many vantage points that look out across the pond where the stillness of the water can help to calm the troubled mind.

Nearby the Japanese garden is the Bonsai house. Opened in November 1999 this building displays up to 70 plants at a time from the gardens 300 strong collection. Many of the plants came from the private collection of the late Len Webber. 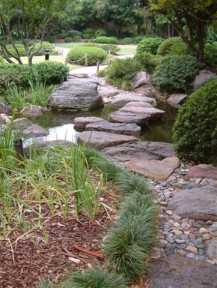 The building itself is constructed using walls of rammed earth. Decomposed soil, clay and cement are combined to form a mixture that is then rammed into a framework. Once the desired height and width of wall are achieved the framework is removed and the mixture left to dry. Colour variations and the type of finish are determined by the type of clays used. After a period of approximately three weeks a protective coating is sprayed onto the surface to saturation point to prevent erosion.

The visitor is provided with a printed guide that provides details relating to each plant currently on display. The latin and common names are given along with the date the plant was established as a bonsai and a description of the style. On this occasion 61 plants were on show with a third of them being Fiscus rubiginosa. Others on display included some fine examples of Azalea, Camellia and Black Pine.