How to Grow Tomatoes You don't need a greenhouse to grow tomatoes but it does help.

The Latin name for tomato translates to wolf peach and this is because the plant belongs to the same family as deadly nightshade. Tomatoes weren't immediately embraced by Europeans because all parts were thought to be poisonous. Though the fruits aren't poisonous, the leaves are so there was some credence to the initial reluctance to adopt this fruit. There's none of that reluctance now. From a fruit that was once feared, it has become an ingredient that most of us could not imagine our lives without.

Far from causing us harm, tomatoes have an excellent reputation these days and it's widely accepted that their antioxidant properties contribute positively to a healthy lifestyle. They are said to be good for your heart and to help to lower cholesterol.

Choosing the best type of tomatoes to grow 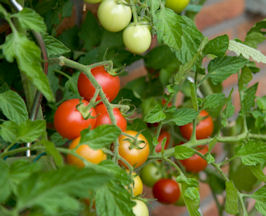 In terms of growth habit, there are two main types of tomatoes - determinate and indeterminate. Determinate types control their own rate of growth. In other words, they will reach a pre-determined height and spread and that will be that. Indeterminate tomato plants keep on growing. These are the most common types and they'll need to be pinched out and controlled all the way through the growing season so that they don't put too much effort into growing leaves and stems at the expense of the fruits.

If you're growing indoors on a windowsill or you intend to place your tomatoes outside on a patio, it is probably best to choose one of the determinate types because they'll stay relatively neat and tidy and look pretty enough in a pot for you to have them on display. The bush type cherry tomatoes will sit nicely on your windowsill and will even let you put them outdoors with no fuss at all.

If you're not so bothered about how they look, the indeterminate cordon types will give you a wider choice of varieties to choose from. However, they're not the most attractive plants in the world, especially if you prune them correctly and they are best kept for the greenhouse or outdoors in a non-ornamental role.

Sow tomato seeds nice and early in the year if you can. You can germinate the seeds in any warm place in the house but, when the seedlings appear, they will need as much light as possible. A frost-free greenhouse is great but on a windowsill with supplementary lighting is the next best thing. If you can supply them with enough light, then a February sowing is ideal. If not, wait until later on in March when the days start to get a bit longer. In all cases, you need to keep the plants free of frost and give them protection from draughts. 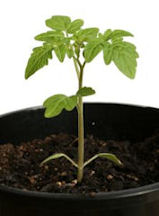 When the seedlings have produced two sets of true leaves, move them on into small individual pots and then, when they are around 20cm tall, into 3 litre pots or grow-bags or, if you have chosen a tumbling variety, straight into hanging baskets.

If you are growing a cordon variety, place a cane in the pot when you make the final transplant and tie the plant to the cane for support. Continue tying as the plant grows.

Tomatoes can also be grown in a specially prepared bed in the greenhouse or outdoors in a sheltered spot once all risk of frost has passed.

Tomatoes are hungry plants. They will need to be fed every two weeks or so with organic liquid fertiliser specially designed for tomatoes. You could use a home-made comfrey liquid feed instead of a shop-bought one if you like. Begin feeding once the flowers have appeared.

If you have determinate tomatoes, no pruning is necessary but, if they are indeterminate types, then remove the growing tip once four or five trusses (bunches of flowers) have formed. This will encourage the plant to put more energy into the fruits. It is really important to remove the side shoots as well - new growth that appears where the leaf stem is attached to the main stem. These side shoots will divert energy from the fruits and you should be vigilant with this task as it will give you a much better yield. Removing the side shoots also helps to keep the whole plant open and aerated and lessens the chance of fungal infections.

Aphids and whitefly are likely to be a problem in the greenhouse in particular. Use biological pest control in the form of ladybird, ladybird larvae or any of the parasitic wasps you can buy from good online stores. Release your biological control in the greenhouse, keep the doors closed or use a net over the door to encourage them to stay for a while and let them get on with their work.

If you prefer, you can spray the aphids and whitefly. An organic pest spray will be kinder to the environment and equally as effective as the chemical ones if you use it correctly according to the manufacturers instructions. 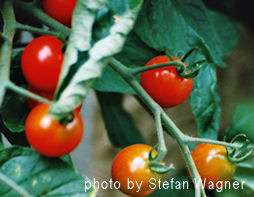 If the leaves of your tomatoes begin to curl, it could be a virus but the most likely suspect will be strong fluctuations in temperature. Where you have warm days and cold nights - in early summer for example, you might find that the leaves will curl up dramatically. If you have the time, you could put a blanket of horticultural fleece over your tomatoes at night but you would have to make sure you take it off in the morning. Otherwise, wait it out and, as the nights get warmer, the symptoms should begin to disappear. The trick with tomatoes is to avoid extremes of temperature so even ventilating your greenhouse or polytunnel during the day can allow the plants to get used to a less drastic change at night. At the height of summer, your greenhouse should be well ventilated right the way through the day as too much heat can be just as damaging as too little.

If you notice a big brown or black spot at the end of the fruit, this is probably blossom end rot, caused by a lack of calcium. Just as calcium gives us strong bones, so calcium strengthens the 'bones' of plants - the cell walls. Without calcium, the cell walls leak and break down and, when this happens with tomatoes, you get this characteristic browning of the end of the fruit. However, simply adding more calcium won't really help since it is unlikely that the medium you are growing your plant in is actually lacking in calcium. The calcium will most probably be there but the plants can't access it until it is properly dissolved. Without a good, regular supply of water, tomatoes suffer blossom end rot because the calcium is not available in its dissolved form. Regular watering and proper ventilation of the greenhouse or polytunnel can prevent blossom end rot from happening. 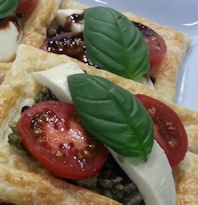 Basil is a pretty good companion for tomato, if only because the two flavours go together so well. Some say basil repels aphids but this is simply not true. In fact it is more likely to be a sacrificial lamb for aphids, attracting swarms of them to the young, fresh leaves at the tip. If the aphids are on the basil then they're not on the tomatoes and all you have to do to enjoy the basil is to nip off and discard the buds at the top where the aphids are more likely to gather.

If you are growing the cordon-type tomatoes outdoors or in a large bed in the greenhouse then a fast growing, low-growing crop such as lettuce will help to prevent moisture loss from the soil as well as increasing the humidity which tomatoes will like. 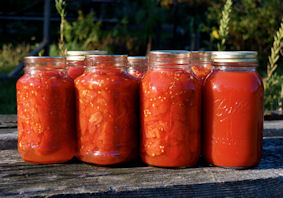 Harvest your tomatoes often so that you can get the most out of your plant and never leave fruits to rot on the plant. If you're going to be on holiday for any period of time, try to arrange for someone to pick your tomatoes so that the plants carry on being productive.

Storing salad tomatoes when you grow your own is pretty much counter-productive because they are at their best when allowed to ripen fully on the plant and eaten just after picking.

If you have a glut of tomatoes, you can make passata to store in jars or in the freezer. Plum tomatoes are best for this but you can do it with the other types as well so that you don't waste a drop.

To make passata, you will need to sterilise some airtight jars or, if you can't be bothered with all that hassle, you could just put the finished result in the freezer. Quarter your tomatoes, add them to a pan of boiling water and simmer for about 15 minutes. Pass the mixture through a sieve and this will capture all the tomato peel leaving you with a nice smooth sauce. You can add basil, garlic, sugar, etc. to taste if you want or store your passata plain, adding in your flavours when you cook with it. Store passata in airtight jars or in the freezer, whichever you prefer. 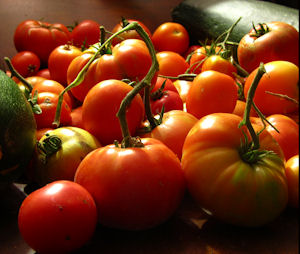 If you want to grow determinate tomato plants, you'll find the best choices in the cherry tomato group. The 'tumbling' group are all great in a hanging basket - 'Tumbling Tom red', 'Tumbling Tom yellow', 'Tumbling Junior' and 'Tumbling Tiger'. Plant these varieties into a hanging basket along with basil, oregano and thyme and you have pasta in a basket right outside your front door. 'Sweet and Neat', as its name suggests, has a lovely compact and upright habit and will do well in a container, either outside or on your windowsill indoors. Popular cordon cherry tomatoes are 'Gardener's Delight and 'Sweet Million'.

The salad types offer less choice in terms of their growth habit. All of the popular ones - 'Moneymaker', 'Alicante', 'Ailsa Craig' and 'Tigerella' are cordon types so you'll have to work harder in terms of pruning and tying. However, there's a reason why these varieties are so popular as they've proven themselves year upon year. All four of the salad types just mentioned can be planted outdoors when there is no longer any danger of frost.

The 'San Marzano' plum tomato is considered by chefs to be one of the best. It's a cordon type but worth the extra effort. 'Roma' is semi-determinate - it has to be staked and needs a little more work than bush tomatoes but won't punish you too much if you don't get around to pruning it.