As a result of using seaweed, seed germination is better, root systems are healthier and there is increased resistance to disease.

Years ago, when you passed through the village of Seamill on Scotland's west coast, you couldn't help but notice the distinctive, slightly unpleasant smell of rotting seaweed. Seamill is in Ayrshire, where they grow the famous Ayrshire potatoes and where, for years, farmers spread seaweed onto their potato fields. Seaweed is said to be the reason why farmers could use the same field, year after year, in which to grow their potatoes and it's claimed that it's the seaweed that gave Ayrshire potatoes their distinctive taste. The labour-intensive practice of spreading seaweed isn't done any more and some say potatoes have lost some of their taste because of it.

A few miles along the coast from Seamill, the Organic Growers of Fairlie are using seaweed to help them grow organic fruit and vegetables on contaminated land. Around a hundred people, many of them first time gardeners, are using the former MOD brownfield site in a community food growing initiative using intensive, crop-producing methods in raised beds. Beneath the raised beds, an impermeable membrane separates the original soil, contaminated with heavy metals, from the new, highly enriched soil in the raised beds.

Ordinary topsoil is mixed with wormcast, basalt rock dust and seaweed to create a growing medium that is rich in organic matter, producing a soil with a high nutrient and mineral content. Not everyone adds seaweed to their beds but those that do report a remarkably high yield of produce from a bed measuring just five square metres.

It's no wonder the Fairlie growers are achieving good results with seaweed when you read about all the positive benefits of using seaweed as a soil ammendment. It acts as a great soil improver, stimulating soil bacteria and the formation of humus. Seaweed contains relatively high levels of minerals. Because modern food production methods have a tendency to rely on the addition of the three main essential elements - nitrogen, phosphorous and potassium (known as NPK) - often the trace elements or micro-nutrients are missing. If these minerals are missing from the soil then they will also be missing from the plants we eat. So, it could be fair to say that eating food grown in seaweed-enriched soil is beneficial to our health as much as it is to the health of the plants.

If you want to give seaweed a try, here's my guide to using seaweed in your garden:

Some local authorities are happy for you to collect seaweed from your local beach but in some areas of special scientific interest, it is forbidden. You need to check with your local authority before you remove anything from the beach.

You should avoid collecting live seaweed and never remove seaweed clinging to rocks. Live seaweed should be left alone to reproduce so that stocks are sustained.

Avoid collecting seaweed from the 'inter-tidal zone'. Seaweed that is left behind when the tide retreats will be returned to the sea at high tide. In the meantime, it is providing shelter for hundreds of creatures and protecting them from dehydration until the sea picks them up again. Pick seaweed that has been pushed beyond the reach of the tide or has been washed up by storms and wash the seaweed in the sea if you can to allow any sea-dwelling ceatures sheltering there to escape.

Ideally, you should gather your seaweed and leave it in a pile on a rock or hard standing close to the beach for a day or two to allow things like sand fleas to escape before you take it home.

Never collect large amounts of seaweed from one place. Many birds and animals rely on seaweed and the creatures that live in it as their food source.

There is much debate about whether or not you need to wash the seaweed before spreading it. Some do and some don't and we all know that too much salt is bad news for plants. The west coast of Scotland receives a high amount of rainfall so those Ayrshire farmers don't have to. However potatoes are a lot tougher than more tender fruit and vegetables. Strawberries and lettuce, for example, have been found to perform badly when planted in ground mulched by unwashed seaweed. Worms don't like salt either so you should err on the side of caution and give your seaweed a wash.

The best way to wash your seaweed is to let the rain do the job. Pile it up on something like a pallet to hold it off the ground and leave it for a few weeks or months depending on the amount of rain at the time. Lifting it off the ground will ensure that the salts are removed from the pile completely. If you don't get enough rain, hose it down from time to time.

The Fairlie growers are able to site their seaweed pile at the edge of the beach. This is the most environmentally-friendly way of washing the seaweed since the salts run back to where they came from. The pile sits on the rack for a few months before the seaweed is spread on the beds.

The best time to add the seaweed is late autumn and winter. Spread it on the beds in quite a thick layer and leave it there until spring. Your seaweed mulch will begin to break down quite quickly and will also keep winter weeds at bay. In the spring, turn the seaweed into the top layer of the soil and plant as normal. If you are concerned about the smell, and it does pong a bit, then dig it in straight away.

One word of caution. You shouldn't plant seeds in a bed that has only recently been treated with raw seaweed. Though seaweed is said to improve seed germination, seeds do not germinate well if there is a lot of salt present so, even if you have washed the seaweed, it is better to plant seeds in soil that has been treated with seaweed the previous year, just to make sure any salt residues have been sufficiently dispersed. Or, you can use a commercially-available seaweed fertiliser on your seed beds.

Seaweed is a great compost activator. Add as much as you like to your compost bin and you'll get a lovely, mineral-rich compost. Make sure you mix it with some woody materials to retain structure. As usual, leave your finished compost in a pile for a while to 'cure' before adding to your soil. This will take care of any leftover salt.

If you haven't got access to the real stuff, your local garden centre will have a good choice of seaweed-based fertilisers on its shelves. It is available in granular form for adding to the soil, as a concentrated liquid fertiliser which you dilute before use or as a ready to use foliar spray.

Julie is a lecturer in horticulture, editor of Gardenzine and author of The Plant Listener. 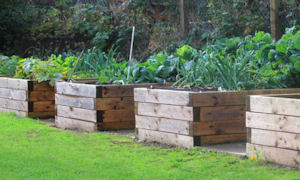 A raised bed is simply a garden bed that is built up above the ground - a method of gardening that solves a wide variety of gardening challenges. 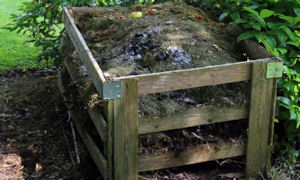 50 Things you can Compost

For those of us who want to do as little work as possible, then composting in a cold system is about as easy as it gets. It's all about knowing the right things to put in.