There is something about the timeless permanence and natural look of a brick patio that can not be matched by any timber deck.

Creating a circular patio adds more interest, and the circular brick patio with a weaving garden path around it described in this feature has the power to stop visitors in their tracks.

This patio idea evolved as more and more bricks were unearthed when clearing out an old boiler house in a derelict garden. Granted, most people do not discover an old boiler house in their garden, but new patio bricks can be obtained at your local builder's merchant or garden centre, and old bricks can be obtained more cheaply from architectural reclamation yards. The bricks in this feature were dug up from amongst buried refrigerator and vehicle parts, sorted and the better-looking bricks cleaned of cement and put aside. Don't forget that a patio brick only requires one good looking top surface. You should not be too concerned with the condition of the sides as you would with a wall. An important point that can easily be overlooked if you are sourcing reclaimed bricks.

A brick patio can be built almost anywhere and the circular part can even be incorporated as a design feature if additional bricks are used to square up to any adjacent straight areas. You may want to locate your brick patio in the sun in order to savour and enjoy some summer sunshine with friends and family. Conversely your patio can easily be located around and beneath a tree that offers welcome shade in summer and a brick patio is easy to sweep up in Spring and Autumn.

Lay out your bricks in a dry run, but you do not need to use every brick. Set out the outer perimeter and a line of bricks through the centre should be sufficient. Don't forget that unless you are intending to use a ready-made centre piece of any kind the last few rings towards the centre will need half bricks to manage the tighter angles.

As a solar panel catches sunlight so a brick patio catches rain. A good foundation prevents the perimeter bricks from being undermined from water run off and eventually 'tipping' into adjacent garden areas. This ring beam was 150mm wide and approximately 100mm thick. Formwork for the beam was created by repeatedly re-using 150mm wide strips cut from a hardboard sheet that became good kindling.

The ring becomes your guide when setting your levels. In the accompanying photographs the circular patio drains towards the centre in order for any run-off to be dissipated by the stone beneath the patio. A hole in the centre allows for drainage and a patio awning if required. Otherwise, any run off at the edges would quickly turn the perimeter planting around your patio into a bog in winter that would almost certainly be the death of many plants. In extreme cases, the centre of the patio will flood, but who wants to go out on their patio in such weather? A wet brick patio can be slippery in the wet, but not as slippery as a wooden deck.

The hardboard forms are best removed the following morning. A base of compacted stone is then added to facilitate drainage.

Begin by laying the bricks on the concrete foundation as you would when building a wall and allow to set for 48hrs. Then it's easy to add the sand that the bricks will be laid upon without fear of dislodging those all-important ring bricks. 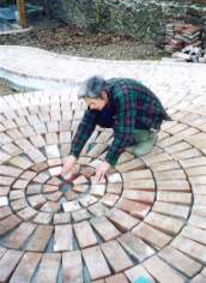 Work inwards towards the centre when laying bricks. It is more convenient to use a piece of wood in order for the corners of the outer bricks to be spread evenly apart.

Once the bricks are laid, a weak sand/cement mix (1:8) can be swept into the joints for grouting and the surplus removed. Then, walk over it with a watering can, not too much, you don't want it washed away, it just needs to be dampened. Job done. Now the next one on the list.... 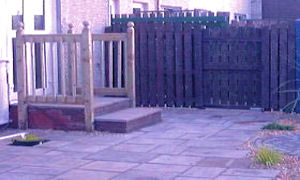 In general, patios should fall away from the house and be level across the house so that the water never gathers at the house and causes dampness problems. 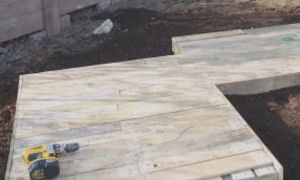 With a bit of care and some nice finishing touches, a deck made from pallets can be a good low-cost choice for a small patio area.