On rocky mountainsides, the sun is strong, the seasons short, the wind is fierce and what little soil there is, gets regularly washed downhill. You would think very few plants are able to survive in these places. However, one group of plants is perfectly adapted to these inhospitable surroundings.

The alpines cling onto pockets of soil caught between crevices in rocks. Their shallow, stringy roots help them exploit the slightest indentation and search for every available bit of water. They can take advantage of mineral nutrients that leach out of the rocks. Tiny leaves reduce their exposure to the strong sun and help prevent against water loss. Just as we do when we venture out in strong winds, the alpines keep their heads down. Some are as little as 1cm tall. The short growing season, and the relatively low prevalence of pollinating insects so high up, means they have a tendency to flower profusely, in a bid to attract as many pollinators as they can before the weather changes.

Generally, rock plants are ridiculously easy to propagate - just pull off a piece with a small amount of root attached and away they will go. It makes perfect sense they should be so willing to regrow after being ripped apart. It must happen to them often in the face of melting snow, strong winds and landslides so they would have to be quick to recover.

The adaptations that allow rock plants to survive have benefits for us too. We can have a low-growing, spreading, relatively unfussy and compactly cute plant with the added advantage of a generous flowering habit and easy propagation. For that reason, the eager plant-hunting Victorians took the alpines from their high-altitude homes and placed them in their gardens. To make them feel at home and show them off to their best, they created 'rockeries'. There was indeed a time when few gardens were without a rockery and their own collection of rock plants. This penchant for planting rockeries continued right up until the nineteen seventies.

Oftentimes, these rockeries were created on flat ground over soils with deep profiles, which didn't suit the alpines at all. They were unused to living with taller plants around them and especially amongst trees so, when leaves landed on them, it was all too much for them and they often went bare beneath the fallen leaves. In their alpine homes, they have little competition but, this new, deep-soiled environment was perfect for other plants, especially grasses whose roots could spread underneath the rocks. Grassy weeds popped up all over these poorly built rockeries, out-competing the alpines. Anyone who has ever tried to weed couch grass out of a rockery will know how difficult it is and why rockeries have become less and less popular.

To grow alpines successfully, it is best to replicate the conditions under which they live in the wild. By giving them a shallow soil, a sloping site and placing them in full sun, you are not being cruel. They were born to live that way and they won't have to cope with any tough gangs of plants trying to muscle in on their territory.

Many alpines are perfect candidates for living walls and green roofs. It stands to reason that alpines - so accustomed to growing in small pockets of soil - make a great choice for this kind of situation. Once you've created the structure, you can experiment with all kinds of alpines until you find the ones that are happiest growing in your situation. For green roofs, you really can't beat the sedums. Up high on a roof and in the company of other sedums, they will positively thrive.

For ordinary garden walls, alpines like Aubrietia, Cymbalaria, Lythodoria, alpine Phlox and the stunning Campanula muralis can be planted along the top of retaining walls where they will cascade down and cover the wall in no time. 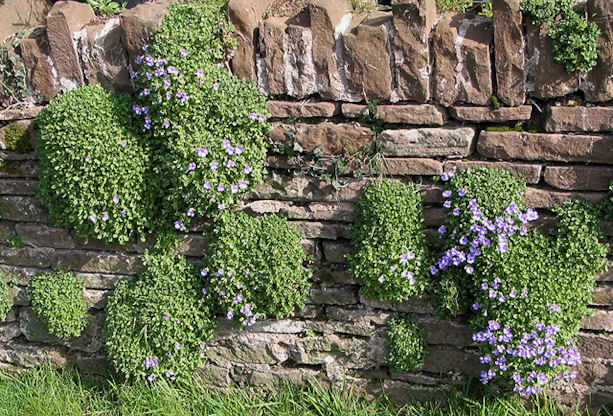 Alpines feel most at home in the company of rocks and they are influenced by the base rocks from their natural habitats. So, before growing alpines, try to find out their pH requirements. Those that have originated from areas dominated by soft, chalky limestone, for example, probably won't be happy in an acid soil. For this reason, if you're creating an alpine garden, scree garden or rockery from scratch, your choice of stone should complement your selected plants. Alpines requiring an alkaline to neutral soil will be happy in a rock garden built with limestone. Those requiring a slightly acidic soil look great alongside granite.

If you have a sloping site and you want to create a rock garden, it should be more rock than soil and they look best with larger rocks since smaller rocks can look like a pile of rubble. Arrange your rocks carefully before placing a mix of 50/50 compost and horticultural grit into the spaces between rocks. This will make your alpines feel right at home.

If you want to grow them in containers, then a stone trough is a good choice. Using the same mix of compost and grit, fill the trough, plant it up and then cover with a layer of gravel. If there is one thing alpines hate is wet feet so a layer of gravel helps prevent this. Place your trough in an area of the garden which is sheltered from rain otherwise your alpines will drown.

Many alpines make great plants for a coastal site. Their ability to withstand exposure to wind and sunlight allows them to survive close to the sea where others cannot. Small leaves reduce their vulnerability to salty air. Some, such as Armeria maritima, Mertensia maritima and Silene maritima will give you a clue as to their seaside preference.

Another great place to grow alpines is in between the gaps in paving. They look especially good in crazy paving. Just leave a few gaps as you lay the paving and plant your alpines into the gaps. 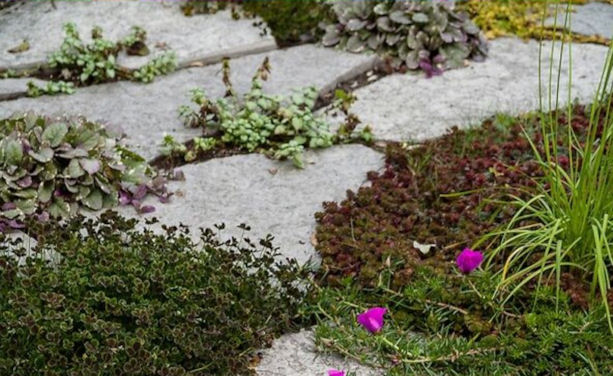 The most important thing to consider when you plant up any kind of alpine garden is to use sterile growing media. This will prevent weeds taking hold. If you come across an alpine garden that has already been infested with weeds, you will need to conduct a complete overhaul. This involves removing every plant and cleaning the roots. Replant the plants you want to keep while you clear out the infested soil between the rocks as well as the rock faces themselves. Once the whole site has been cleaned, you can replant into sterile growing media. 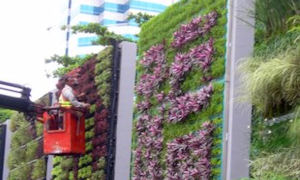 Green areas are popping up all over cities, in balconies, roof gardens and more. But why do green areas need to be flat? 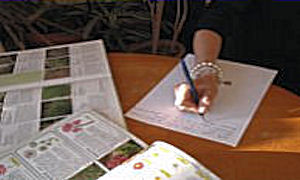 If you are planning to create a whole new border all at once, a planting plan will help you decide on the best plants to use