The blue tits are tidying up their nesting box, the jackdaws are making a racket in the eves re-building their nest, the boats are gradually returning to their moorings out on the River Clyde and I'm off to the Canaries for a couple of weeks. Finally spring is here and I've had one wee job to do before I go.

Throughout winter we've had a couple of small tortoiseshell butterflies hibernating in the folds of our curtain. Lately they've woken up, taken a few test flights around the house and then gone back to sleep again. Every couple of days we find them sleeping in a different place and we've had to keep moving them to keep them away from Henry the cat. Since the weather will be good for a week or so and I can't expect the cat sitter to look after the butterflies as well as the cat, I've had to put the butterflies outside. 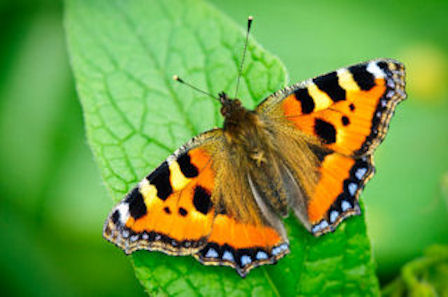 One gentle tap on their wings and each in turn slowly woke up, stretched out their wings and crawled onto the warmth of my hand. Since the only thing in flower in my garden is my drumstick primulas, I placed each of them onto a flower in the hope that they might get a little energising drink. Then I hung about to protect them from birds while they gained some strength from the sun. Minutes later they were up and about and flew straight towards the emerging nettles in the corner of the garden.

Now I can't tell you how many times I've been stung by nettles but I would never be without a nettle patch in my garden. For my small tortoiseshells, they are a huge draw - a place where they can deposit their eggs in the knowledge that their young caterpillars will grow up protected by the nettle stings. And they're not the only ones. Other species of butterflies and beneficial insects make use of the defence system of nettles to provide a safe haven for their young. Most grazing animals will avoid nettles for understandable reasons and so the larvae of all sorts of insects stand a much better chance of survival in a nettle patch.

Nettles, Urtica dioica are dangerous plants and I rather like dangerous plants, especially ones that can always get the better of humans. Their stings are like very small hypodermic needles that break off and lodge in your skin whilst injecting you with poison. The initial burning sensation is caused by formic acid and then histamine prolongs the agony by causing uncomfortable itching. It's an instant and effective plant defence that definitely tells you 'hands off!' Their defence is so effective that the Dead Nettle plant Lamium album has chosen to imitate the look of nettles without the sting in the hope that grazers will leave it alone as well.

We've all experienced the pain of a nettle sting but our native nettles are not the worst by far. That dubious honour goes to a native of Australia - the Gympie Gympie Tree. The sting of the Gympie Gympie has been described as being electrocuted and burnt at the same time and if you don't get all the hairs out, it can continue stinging you for months and even years!

The Gympie Gympie makes our stinging nettle seem kindly by comparison. The pain of a stinging nettle is really just a gentle reminder to leave it alone and I would advise all gardeners to leave at least a small amount of it alone somewhere in their garden.

Nettles are high in vitamin C and iron and I'm sure everybody's heard of nettle soup. You can steam nettles and use them like spinach or make use of the many recipes available on the internet.

Nettles present a highly nutritious meal for plants too. Simply take a good amount of nettles, crush the leaves (wearing gloves of course), put them into a bucket of water and leave them to ferment. Dilute the resulting liquid one part nettle tea to ten parts water and use as a liquid fertiliser for leafy plants which will benefit from the high amounts of iron.

Nettles in the compost bin make a good compost activator and increase the nutritional content of the resultant compost.

Sadly my small tortoiseshells are nearing the end of their lives. They have survived through the winter with the sole purpose of ensuring the next generation of butterflies and, after they have laid their eggs on my nettles, their days will be numbered. I'll be keeping a look out for the caterpillars but neither myself not their parents needs to worry about them. They will be as safe as they can be in the care of their nettle nanny. 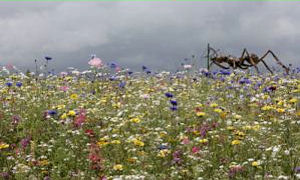 Garden designer Ivan Hicks, co-creator of the meadow at Butterfly World, gives us his top tips on creating a wildflower meadow.

Invite Butterflies to your Garden